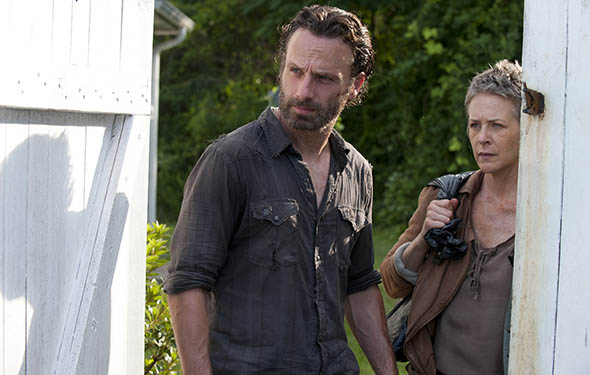 Lot of good stuff happened this episode. Let’s get to it with the recap of the “Indifference” episode.

Carol and Lizzie have a talk. She tells Lizzie that she is going on a run with Rick to look for more food. Lizzie asks if Daryl is going to die. Carol tells her that he had to go far away to get the meds and bring them back. She tells Lizzie they will be back soon. Lizzie says, “Nobody has died yet. I think a lot of people are going to die. That’s what always happens. Makes me sad but, at least they get to come back.” Lizzie means that the people who die always come back as walkers. Carol responds, “Lizzie, once they come back people aren’t who they were.” Lizzie goes on to say, “Yeah? But they are something. They are someone. I’m little now. If I don’t die, I’ll be big. I’ll be me. But I’ll be different. That’s how it is.” Yeah Lizzie is kind of messed up in the head. Poor kid.
Then Carol goes on to say, “We all change. We all don’t stay the same way we started.” She tells Lizzie its more complicated than that. Lizzie tells Carol that she told her that she was weak. Lizzie isn’t weak now. She is strong. She says to Carol, “So I am telling you what I think.” Carol asks Lizzie what she should when she is faced with danger. Lizzie answered her with “Run as fast as I can.” Carol adds, “You run and run until your safe. And if its your life or your sister’s life, you can’t be afraid to kill. You understand?” Lizzie replies with yes. Carol tells Lizzie that she is strong and that she will live. She adds, “You, me, and your sister are going to survive. Know it.” She asks Lizzie where is her knife. Lizzie lifts up her shirt and shows it to her. Carol says to put her t-shirt behind it so she will able to get to it quickly. Lizzie replied, “Yes mom. I mean ma’am.” Carol told her not to call her mom. Lizzie called her mom by accident. I guess that made Carol a little bit uneasy.
Carol asks Lizzie, “What is it?” Lizzie says, “I’m not afraid to kill. I’m just afraid.” Carol tells her that she can’t be afraid. “How?” Lizzie asks. Carol answers her back with, “You fight it and you don’t give up. And then one day you just change. We all change.”
As Rick gets ready for the supply run, he decides to go back to Cell Block A to retrace Carol’s steps when she killed both Karen and David. He realizes that Carol killed them in their beds while they were still alive. She killed each one of them with her knife and dragged their bodies outside from Cell Block A. Then she burned them. So they didn’t die from the virus symptoms and turned. But why would she kill them while they were still alive? He goes back to the car and opens up his knife bag. He notices that one of his knifes is missing. Carol took one of Rick’s knifes and used it to kill Karen and David. I don’t understand why Carol changed. I know there is a reason for it. Carol is still a caring person. Maybe she was fed up with it. Maybe she felt if she killed Karen and David who were the first ones who were sick with the virus she would stop the issue. But it will only cause more problems for her. She has to live with that guilt for as long as she fights to stay alive. I think Rick is going to get the to bottom of this and ask Carol why she did it.
#2: Back in the Woods/Most Awkward Car Ride Ever: Carol & Rick
Meanwhile back at the woods, Tyreese washes his shirt covered in walker blood in the river. Michonne says that the school is still miles away. Bob says that they need a new ride. Tyreese is certain that his sister and everyone else that is sick is dead. Bob just tells Tyreese to keep on moving. Tyreese feels like if they keep on moving it won’t solve anything. People will still die. That is not the type of positive mentality to have there dude.
Carol and Rick are in the car heading to some places to look for supplies. Carol told Rick that Maggie wanted to come. Rick told her that someone had to stay behind and keep watch of the others. Carol then says, “Someone you trust you mean.” I kind of understand why Rick took her along for the supply run. In a way he doesn’t trust her staying back at the prison, but at the same time, he  wanted her to come so he could have a heart to heart chat with her.  I think Rick was going to ask Carol the reason behind her killing two people in cold blood. It would have been different if they were walkers. But she killed them in their sleep. How can she justify herself for the actions she took?
Carol explains to Rick the reason why she killed them:

“They would have drowned in their own blood. They were suffering. We needed the bodies to be gone. We needed it to stop it from spreading. They were the only ones that were sick. They were a threat. I was trying to save lives. I had to try. Somebody had to.” 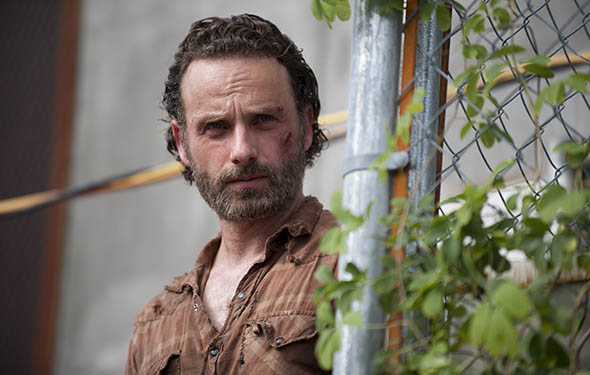 Some people thought that this past episode of the TWD entitled, “Infected” was just a boring weepfest. Honestly to me, I actually thought it was a pretty good episode. Here I will now summarize 11 moments from the past episode. Yes I said 11. Sorry for the short intro.  I am just excited to get into this episode recap.
Let’s get started: